I have tried various streaming services; Sling, USTV, Direct TV Now, and PS Vue. Of those PS Vue had the best value, but was pricier than I wanted. $20 is the sweet spot that I would like to pay for streaming TV with broadcast channels included. None of the above mentioned services offered complete broadcast channel streaming.

Charter offers a solid broadcast streaming package but its very difficult to get any information on it. There is no mention of it on their website and information on the web is dated at best. Recently I received a letter from Charter letting me know about Spectrum TV Stream Plus. 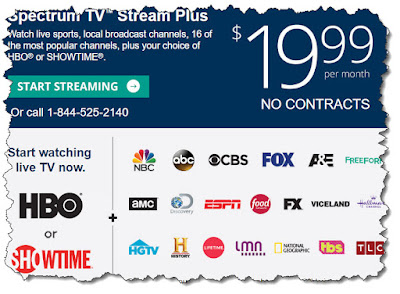 So here is the rundown; $20 a month, free Roku, no contract, 20 cable channels, 1 premium channel, and a host of local antennae channels.

The Spectrum app allows you watch all the channels, authenticated by your router, on your phone or tablet. One of the questions I asked was ability to stream to TV from a Fire TV or Chromecast. The answer I received  was "you should" but the app stops working when mirroring or Chromecast is in use. On the Spectrum Streaming site a small app will install on Windows which will limit your ability to cast to your TV from a computer. Using an hdmi cable from your laptop to TV worked fine.

The promo advertised a Roku 3, but I got a Roku Premier yesterday, which was about 4 days from when I ordered the service. With Spectrum Streaming Plus I get all, and I mean all (15) , the broadcast / antennae channels available in Madison, WI. You also receive about 16 basic cable channels including A&E, History, FX, AMC, Nation Geographic, TBS, Viceland, and ESPN. You also get one premium channel so I get about 12 HBO channels with Spectrum Streaming.

My biggest complaint with previous TV streaming was the guide and Spectrum Streaming Plus' guide is fast and smooth. Additionally I was able to authenticate HBO Go, History, A&E, FXNow so I can watch those channels on the go.

Spectrum is not marketing this service to everyone. They do not reference it on their website and promotion is very targeted. The first person I talked to had no idea what was in the promotion or services offered. Spectrum Streaming Plus is directed at Spectrum internet customers who will never purchase TV in their promoted bundle. The only Sports that is offered is ESPN and the only News is C-Span. The cost and number of antennae and cable channels offered vary by market.

So is Charter Streaming a good deal. For me it certainly was. I got a free Roku, lots of broadcast channels my antennae would never get, a solid selection of basic cable channels, and HBO which can cost $15 solo. There is no contract so worse case scenario is I get a free Roku.

Posted by Nate Schmolze at 7:36 AM