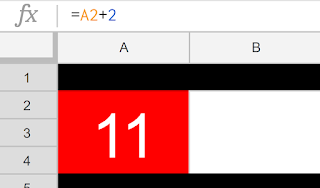 Steve Wyborney Powerpoint on the Duplicator got me thinking about how one could do something similar in Google Sheets.

What I came up with was Guess My Rule.  A teacher or student can insert a number into a cell (red) and then the rule would be applied (+2) to a red box (cell), then green, then blue, and finally orange.

In the robot machine scenario the rule is applied upon the robots entering each room in order (red, green, blue, and orange).

I have created tabs for +2, +3, +4, +5, x2, x3, x3, x4, and x5.  As a number in chosen to go the Robot Making Machine, students can try to figure out what rule is being applied. For an added challenge you could blackout one or two rooms by changing the fill color.

I adapted Steve Wyborney Powerpoint into a Google Slide with actual robots instead of cubes. I also used Google Sheets to model and think about Steve Wyborney's Duplicator Riddles.
Posted by Nate Schmolze at 10:12 AM